For the Love of Trees 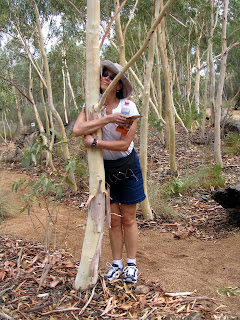 Trees. I love trees. Trees are the visual backdrop to the change of seasons. Bare in the winter, tender green in the spring, deep shades of green in the summer, and colorful in the fall. It is the last weekend of Summer and you can smell Fall in the cool morning air. The forest is starting to dress for fall with shades red, orange, and yellow.

My love of trees started in my childhood. We had big tall trees in our backyard. Younger, I took refuge under the biggest tree entertaining myself with imaginary games of ladies in distress and the brave knights that rescued them. Older, I spent hours reading under the shade of that tree. I remember feeling sad the day my dad had to cut some trees who were dying because of dutch elm disease. Our backyard seemed oddly bare after that. My favorite tree was spared.

Many years later, when my little brother was born, that same tree became the home for his tree house. My dad lovingly built that tree house for his only son, who came to them later in life after four girls. The tree house was in the form of a pirate ship complete with a decorated bow, an anchor that could be thrown overboard and wheeled back in, and a zip line to another tree for a quick escape in case of invasion from enemies. One day, my dad and my brother ceremoniously buried in the ground, at the base of the tree, a treasure chest that became a time capsule filled with mementos of a child's life.

My love of trees has followed me into adulthood. My family teases me because I come back from every trip with pictures of me hugging a tree - in Japan, Australia, Thailand, and in my own country, hugging centennial trees in Stanley Park in Vancouver (BC).

This week I watched a movie called Taking Root about Wangari Maathai, a Kenyan woman who also loves trees. She won the Nobel Peace Prize in 2004 for her work planting trees.

"Today we are faced with a challenge that calls for a shift in our thinking so that humanity stops threatening its life support system. We are called to assist the earth to heal her wounds. And in the process, heal our own… In the course of history there comes a time when humanity is called to shift to a new level of consciousness. To reach a higher moral ground. A time when we have to shed our fear and give hope to each other. That time is now."

At the beginning of the movie, Wangari Maathai tells the story of how, when she was a child, she spent hours playing by a huge fig tree near her village. At the foot of the tree there was a stream. In the stream there were colorful and glittering frog eggs. She thought those eggs would make wonderful beads for a necklace and she would spend hours trying to collect them in her hands. One day, after spending years studying abroad, she returned to her village and was saddened by the fact that her tree had been cut down to make place for a church. The stream had dried up. There was no more vegetation. The land was dust.

That was the beginning of her quest to reclaim the land of her native Kenya.

Maathai started by reconnecting with the rural women with whom she had grown up. They told her they were walking long distances for firewood, clean water was scarce, the soil was disappearing from their fields, and their children were suffering from malnutrition.

Planting trees was the answer. Maathai taught the women how to plant trees and they taught each other. These women found themselves working successively against deforestation, poverty, ignorance, embedded economic interests, and government corruption, until they became a national political force that helped to bring down Kenya's 24-year dictatorship.

Wangari Maathai wanted to remind her people of the values and wisdom they had inherited from their ancestors. She wanted them to remember how to live in harmony with nature. It was not until foreigners came to their country, the English who wanted to colonialize them, that their natural resources were seen as a way to make money and gain power. The delicate balance between human and nature changed then and led to disastrous results. The earth was stripped of its bounty and people began fighting over the earth's resources.

In essence, what Wangari Maathai did was help people reconnect with something deeply imbedded in their psyche, a profound respect for nature and for the old ways. Once people re-discovered their true path there was no turning back.

"You raise your consciousness to a level where you feel that you must do the right thing, because it is the only right thing to do."

Your strong conviction gives you the courage to act. And acting in community can change the world.
Posted by Sylvie Lapointe at 6:14 AM